Zhara-Obertje
(Keur,born in 2004)
-The convincing 2007 Dutch champion of the 3 year old mare selection from the KWPN
-Full sister to the KWPN approved stallion IPS Tango, who is now successfully competing with Hans Peter Minderhoud in the saddle
-A full sister (V-Obertje) also performed very well in the mare selection in 2005 (6th place in the Dutch finals !)
The press coverage about Zhara-Obertje has been exceptionally positive, with Jacques Verkerk (KWPN inspector) noting that  Zhara is ‘possibly  the most beautiful dressage mare ever bred in the Netherlands’.
Zhara has received her basis dressage training from Frenk Jespers and his team, and she has now advanced to the level ZZ-Z  dressage, and thus obtained the Sport predicaat.
During Easter 2009, a filly foal was born (with the application of embryo- transplant), from her and Tushinski ( Krack C x Pion), and we named her Easter Joy Zhara. Meanwhile , she has a new owner in Belgium. She was renamed Elista Obertje and she obtained a great 80/80score at the KWPN mare admission  event in June 2012. Meanwhile she is Elite, and successful in class ZZL

Encouraged by this success and the beautiful foal, we have again applied embryo-transplant. In spring 2011, Gorgeous was born, by Negro--a very appealing colt ! Gorgeous has meanwhile also found an ambitious new owner. In 2012, Zhare gave a colt foal from Don Schufro,who is meanwhile approved as stallion for the Oldenburger Verband. In  2013 she gave a filly foal from Negro, who very much to our grief died in an accident in the field in 2014.

Unfortunately, we did not get a foal from Zhara in 2014. We do own Kazhara out of Zhara

In 2012, a colt foal from Don Schufro was born, named Happy Feet, he is strong and beautiful !

Zhara Obertje is born in 2004, and bred by Huub and Tinie van Helvoirt, which have a great record of achievement of  breeding dressagehorses. We bought her as foal in connection with the Elite Auction Borculo. During admission in the KWPN register, Zhara obtained 90 points for exterior and 80 points for movements. She subsequently won the regional and national championship.

A few quotes in the press, taken from ‘In de Strengen’:

IDS, 23 aug 2007: Astonishing Zhara –Obertje turns Ermelo on its head.
With a model approaching perfection for a dressage horse, and a trott with great impulsion and suppleness, it was utterly clear that Zhara- Obertje would be chosen as champion of the three year old dressage mares. Even the best artist would not have been able to produce something better: Zhara-Obertje has it all: extremely beautiful, well developed and strong movements

IDS ,10 january 2008: interview met KWPN inspector Toine Hoefs:
Which horse would you name as the ideal horse?
I am immediately thinking of Zhara-Obertje. A horse which impresses you from the first eye sight with her elegance and expression. I immediately got the ‘kippenvelgevoel’. A feeling which is difficult to describe; I also felt it with Bonfire

IDS, 24 april 2008; interview met KWPN inspector Klaas Iwema:
Which horse would you name as the ideal horse?
For show jumping, this is Ramiro. He has achieved it all, and left a great legacy. For dressage, this is Zhara-Obertje: A beauty with a lot of potential for the sport. If I had the budget to buy a horse like that, then I would do so as investment for the topsport

Tango, the full brother to Zhara-Obertje, is achieving very well at this time in the Grand Prix dressage , with Hans Peter Minderhoud as rider. From Tango’s first year of offspring, two sons were registered as approved stallions, and four daughters were invited for the Dutch championship. 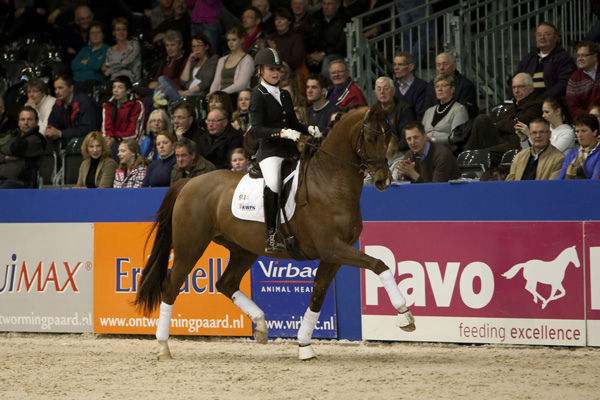