Dance on Jazz is owned by our daughter Stephanie

We named her Dance on Jazz only after we saw her movements potential. A very appealing mare ,as daughter  from Zippy Top T. The combination Jazz x Ulft (through Rousseau) has a proven success record, and we expect a lot from her for the future.

Thus far, she has met expectations, as she reached the finals of the CK Veghel (Regional championship), and got an invitation to compete for the National Championship (NMK). With this, she follows in the footsteps of het mother and grandmother,who both reached the finals of the NMK. During the NMK,in a field of the 36 best mares of the Netherlands,  she was impressed by the scene and as a result did not show her full potential. Nonetheless, she finished well in the midfield of the competition, with praise from the judges for her technique in movements.

Please have a look at her pedigree, with multiple generations of sportive achievement as well ! At age of 7 she was already ZZ- Zwaar in dressage and made a very good debut in Prix St George with a second place with almost 65%. Her basic gaits and her very active and obedient character provide the basis for this success at a young age. By now she gave us already two beautifull stallion foals. 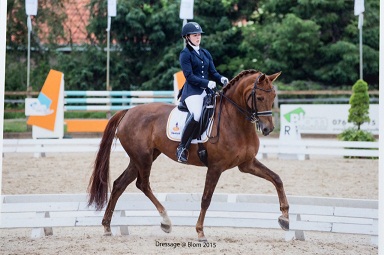